I can’t still picture the real size of the Rio de Janeiro metropolis that even from the airplane seems to not have any end in any direction.

It was February, few months ago, when I landed in Rio de Janeiro for the first time in occasion of the Brazilian carnival (The best carnival and waterfalls on earth), one of the most colourful and spectacular events on Earth! So good that I didn’t visit any of the city neighbourhood completely hypnotised by the good vibes of the celebrations…

So why not to pay Rio another visit on my way north, even more since I am still keeping my feet on ground and preferring the slow progress of land transportation rather than flights.

But before getting to the 11th most dangerous cities worldwide, a small detour of a couple of days to get a taste of Illha Grande. This island is famous in brazil as a natural paradise: uncontaminated forest, idyllic beaches and not a single car allowed on the island, just tractors transportation from one side to the other of the island!

Travelling low cost is a must for a such long travel as mine and soon became a challenge and game to obtain the best price almost for  everything trying to reduce the gap from the real and the “tourist price”. Getting to Illha Grande is one of the best scores I got in lowering the price: from the tourist price of 40 Brazilian Rias for a fast boat to only 20 Rias (for the same boat!).. Just the same price workers on the island pays: sorry too proud not to tell you!

And now I’m on the island with no clue about where to sleep.. few talk with the locals and I end up in the hostel with the right energy and atmosphere: the Beach Hostel, just out of the touristic seaside walk. As usual Hostel is synonymous of new friendship and after in a blink of an eye we’re a big table sharing cooking and food and I also get a buddy to hike together “Pico Papagallo” (literally “Parrot Peak”). The clouds and fog are not helping, but once at the top the sky clears up a bit and give a rewarding view on the island

Unfortunately time is over and I’ll visit the famous beaches next time: Rio is waiting!!!

During the Carnival I stayed in the most central neighbourhood of Lapa, famous for the very active nightlife. This time I opted for a cozy Airbnb apartment just in between the sandy and sunny beaches of Ipanema and Copacabana. A cyclist and running track run on the seaside along the two beaches that are delimited by the old Copacabana Fort: nice fortress to visit, especially the Confeitaria Colombo that welcome us with good sweets and a unique view on the Copacabana beach).

The nightlife of Copacabana is much quieter and chill out compared to the clubs and bars of the central Lapa, but already the first night I get surprised by a live music bands in a simple old fashioned small bar with a such familiar and welcoming atmosphere. A friend explains me that the Band is actually a famous one even performing during the Carnival as a famous “block” (concerts moving around usually on small truck). 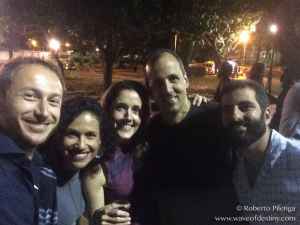 Adriana, a friend met during the Carnival, brings me along with some of her friends to a live Jazz concert on the beach “Praia Vermelha” situated just at the base of the famous mountain “Pan de Aḉucar” (“Sugar Love”).

As usual I look again a way out of the typical touristic attractions or at least a diversion from it and I start taking contacts to climb Pan de Azucar, and I mean Climb as climbing and not by hiking or skytrain. There is indeed this amazing climb called “The Italians” (isn’t it a call that way to attract me?? ) that climbs on the vertical face just below the skytrain: 6A/6A+ the most difficult grades on the route, not that easy since I climbed twice in the last 8 months…

Still a bit doubtful to take the challenge it will be the rainy and cloudy weather to take the decision for me… and probably to save my life! I have now a reason to come back a third time to Rio…

A hike to the top of Pico dos Irmaos is also cancelled due to clouds. This viewpoint can be reached through a couple of hours hiking but only after reaching the starting point just at the top of Vidigal Favela. Crossing this Favela with a motor-taxi is apparently “safe” and “not dangerous”: apparently true since a girl I met is staying in a hostel there since few days and still alive!

Will be also for the next visit to Rio then, but this city just doesn’t allow to get bored!

We first explore the centre to then check out the Jardin Botanico, a couple of museum and the lake area, perfect for picnic and sports.

I don’t queue at the Christ for a photo neither go for a Favelas tour or jump on a touristic bus around the city.. Scrolling around the city, feeling its vibe and trying to live with the locals is my choice for this never ending city!

My favourite spot at the end of so much visiting and walking around?

Definitely the neighbourhood of Santa Teresa!

I will chill out here for three consecutive days, sometimes it with a clanky tram climbing the hill to the top every 30 minutes. The area is mainly a street that gives me the impression to be more in an European city rather than in Brazil: small shops of artisans, cafes and restaurants with “Comida casera” (homemade food).

Thank you Rio: you are a very interesting city, full of culture and different neighbourhood to explore.