You are here: Home / India / Varanasi: the most spiritual travel in India

My travel to India: couldn’t start from anywhere else than the incredible and astonishing Varanasi!

“Just don’t miss it!” they said me many times…
I fully agree, but I need to add “Give Varanasi enough time and at least 3 or 4 days”. 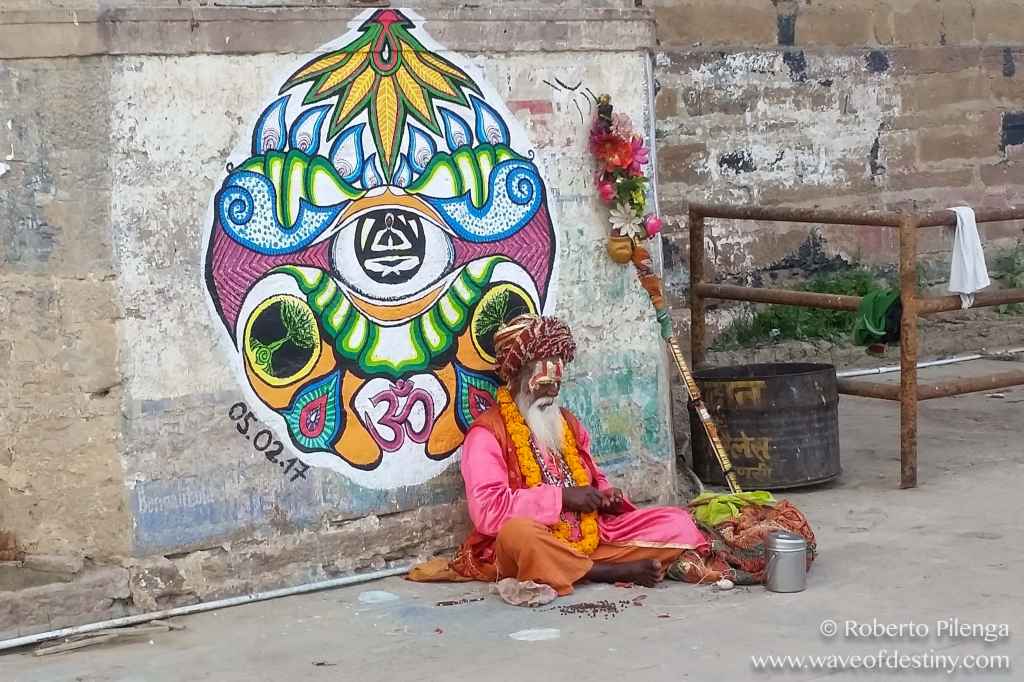 Varanasi is an Indian city and as such on top of being huge is obviously extremely crowded with a persistent honking on the super trafficked roads. It just gets into your ears and brain, but in Varanasi is enough to move on Ganga’s riverside to enter a completely different world.

All the places here just spread energy and spirituality that pervade and surprise.

Once, twice, multiples times I just couldn’t refrain myself from wandering hours on the endless ghats overlooking the Ganga. Getting lost watching not only the continuous powerful flow of this sacred waters, but especially the unique atmosphere, people and activities on its riverside.

Since the first evening I remain hours at the Manikarnika ghat observing the sacrality of Indu cremations. 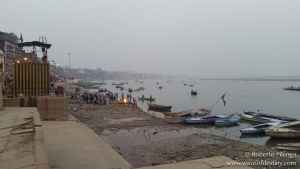 Piles of wood are stocked everywhere near the ghat and nearby roads ready to provide the best cremation for Hindu. Whose body will be burned in this city will indeed receive the highest reward for an Hindu: the obtainment of instant “mukti or moksha” that means the freedom from reincarnation circle and achievement of the highest state of the soul.

It’s for sure a great consolation for the families, but the peace, pride and strength of the relatives performing the ritual of cremation is unique and touching. Not a single teardrop is allowed, otherwise this would retain the soul of the dead and not let her free.

For this reason woman are not allowed to reach near the cremation pile and are allowed to observe it only from distance.

Another reason is a bit more shocking and linked to the old tradition, especially observed in maharajah’s families, for which the widow used to immolate herself on the burning pile of the dead husband.
This habit has been nowadays forbidden by law, but widows are still expected to observe a mourning for the rest of her whole life: she will not be allowed to leave her room and have to cook and eat separately from the other people. The only hope of change for her will be a new marriage with a widower.
Luckily also this tradition is changing with time, at least in the bigger towns.

The wood is carefully weighted and prepared into a pile in the assigned spot by young guys belonging to untouchable cast.

Economic wealth plays its role also in the moment of death defining the quantity and quality of wood that is purchased (sandal is apparently the most desirable) and the spot where cremations will take place: Poorest people near the walking path more far from the holy Ganga, middle class just on the side of the river, while an high platform is reserved to rich and powerful people, and to foreigners.

A pile of wood has just been prepared when four man arrives from one small street chanting a ritual mantra.

They carry a bamboo stretcher on top of which a deceased person has been properly tied and covered with a white shroud. They reach the Ganga holy waters and dip in it the full stretcher for three times, before untying the deceased and carefully position him on top of the wood pile. 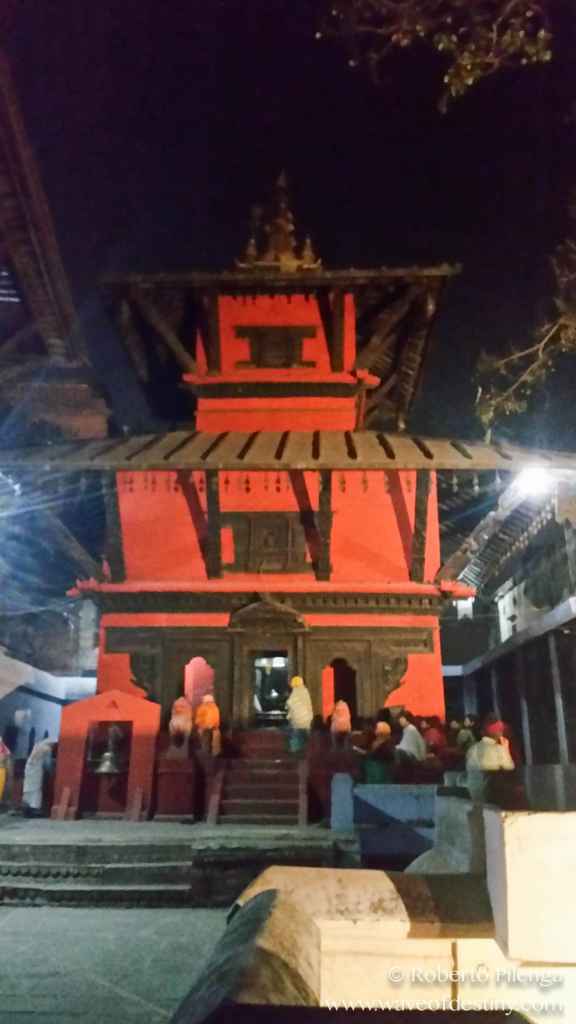 young guy suddenly appear. He is fully dressed in white and his head has been carefully shaved: he is the one who will initiate the cremation of the close relative!
In his hands a bundle of dried grass has been lighted up from the eternal fire kept on at all time in the near by temple. The young master of ceremony walks around the body clockwise for five time, each time touching the head of the dead with the sacred fire. Finally the bundle of grass is all in flames and he tuck it under the wooden pile that immediately catches fire.

What happens next depends on the different people: some walks away while others carry on watching and taking care of the fire developing in all its power, but all of them come back 3 hours later next to the consumed pile for the last ritual. This time they carry a vase full of water that, after giving a last look at the burned pile, they throw it over their shoulder in their back over the the dying embers. Then they walk away and will never turn back to avoid seeing the spirit near the fire or in their future dreams.

But not everyone is cremated even in the Hindu religion and few corpse have a special luck and treatment.

They will be given directly to the cares of sacred Ganga’s waters, after a heavy rock is tied to their body. Pregnant women, infants, people dead due to snakes bites and sadhu (religious ascetic or holy person).

On Varanasi’s riverside not only cremations takes place and every evening at 6 pm a clanking of bells accompany a sacred celebration to honour this holy river Ganga and the gods of Hindu religion.
A spectacle that is better seen from the crowded river rather than the waters full of tourists boats.

The sunrise lighting up the temples on the coast is better seen from a rowing boat.

(400 Rupees in five people for an hour and a half) and from here I notice the reddish Nepalese temple: a must visit and the perfect spot to observe in complete tranquillity the walkway below at the sunset time. 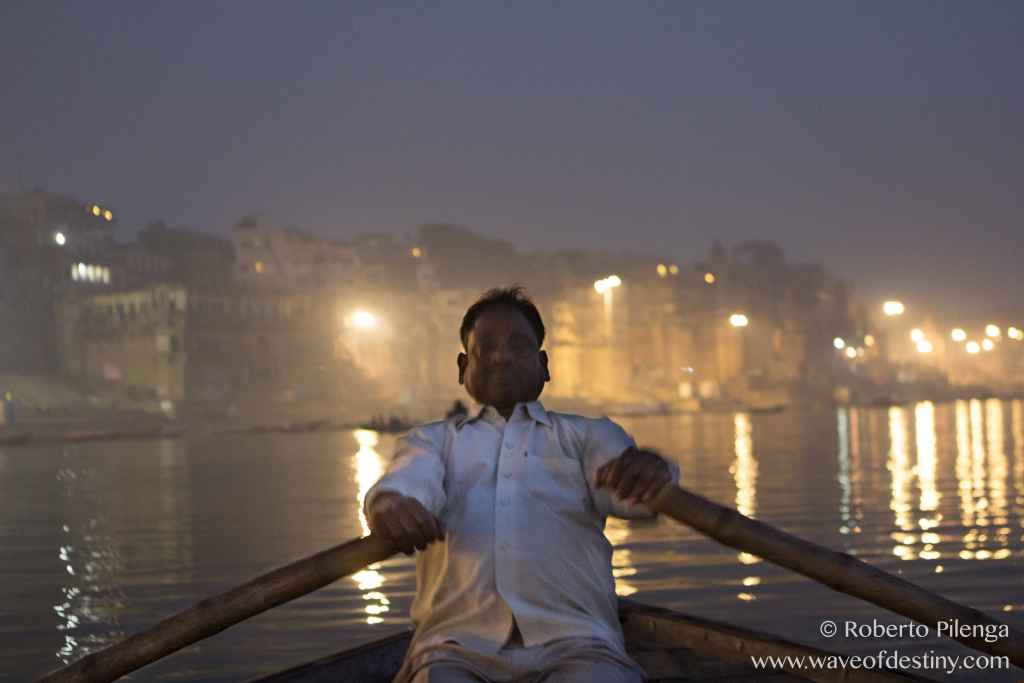 Much more can happen in this town and for me it’s a Reiki session:

a healing technique that uses universal energy. For an hour Mark will pass his hands along my body without neither touching it, but the sensation of warmth is strong and concrete as much as the balance and equilibrium that I feel walking out of the Yoga training centre.

Last but not least a culinary suggestion:

Don’t miss to pay at least one daily visit to Baba Lassi or Blue Lassi.
Haven’t find a single Lassi in whole India that can barely compete with them! 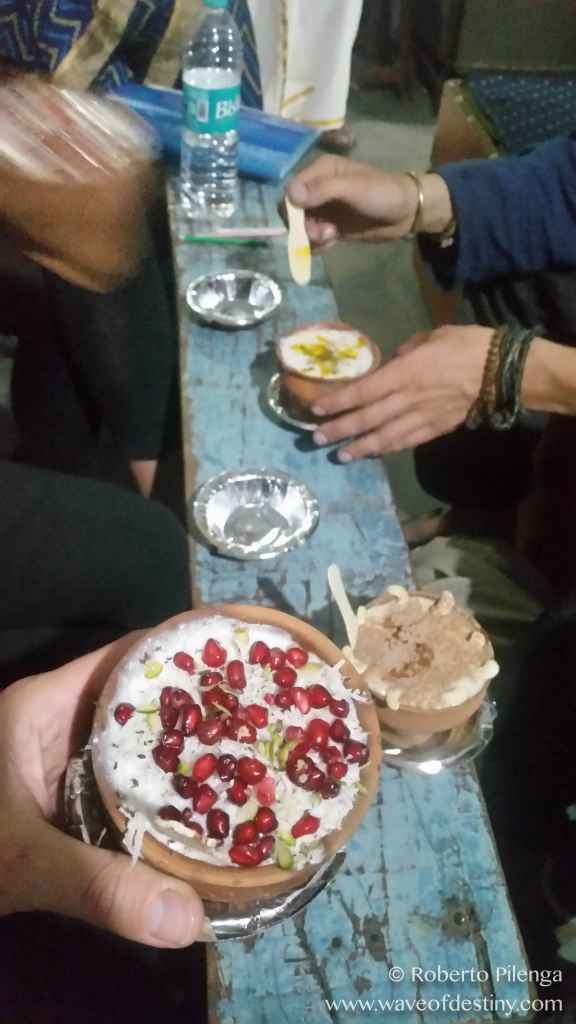