You are here: Home / caribbean / The Vagabond of the Oceans and the Dutch Lady

His name is Marco and he’s sailing solo since 23 years.

Saturn is the name of his boat and home. She’s 7.20 meter long and more than 40 years old: a simple glaze at her transmit a feeling of adventure and when I listen to the stories from Marco I feel like being in the movie “The Life of Pi”.

The stop in Point a Pietre, Guadaloupe, with Wind Whispers gave us the good encounter with a cool French couple friend of Luis. Laurent and Anne Marie are living on board their first catamaran with their two young children who moves around the boat and the dingy like any safe playground. They started sailing when they were only 23 years old, first cruising the Med to then move in the Caribbean where they’re now setting up a business buying, fixing and then renting our catamarans for charters: all the best guys!

Despite the stop in the port the fridge is still not working and following the weather forecast we change again our plans and instead of sailing to the small island of Maria Galante we take advantage of the last two days of wind to head back to Antigua through the West coast of Guadaloupe with a night stop in Deshaies. 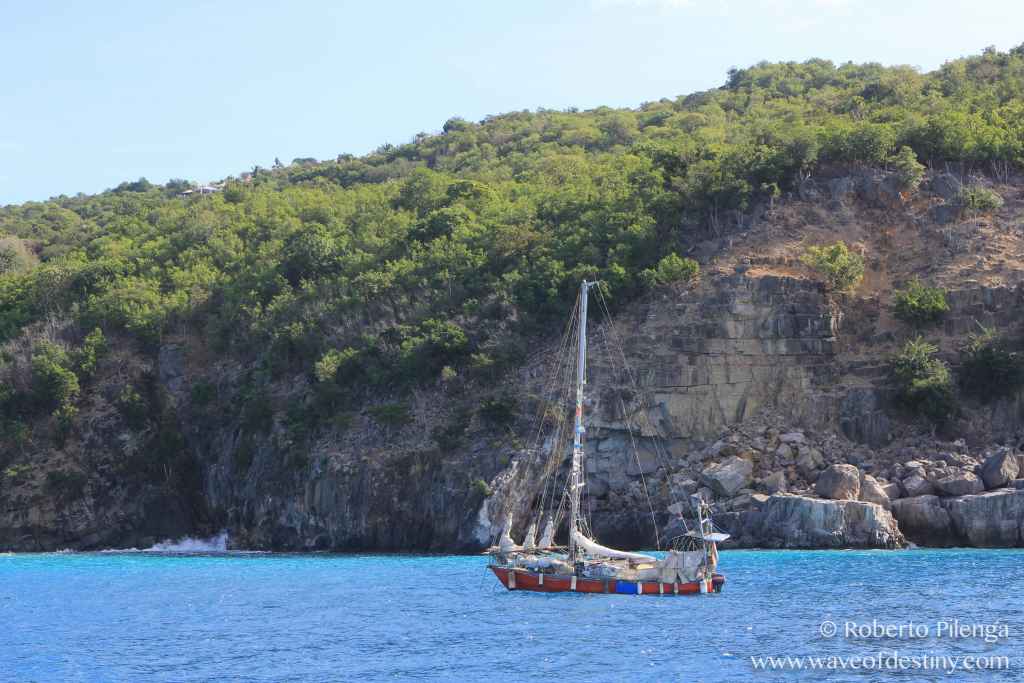 I take few snapshot wondering about her history and of who is living on board, but the waves and the wind will bring us to anchor side by side few days later in St. Barts (St. Barthelemy) to discover all of it.

We buy a couple of fresh French baguette in Desahies and pass through customs another time before sailing with a good eastern wind till Galeon bay: back in Antigua!

The stop over of 4 days waiting for the wind is full of surprises and good time with old and new friends. The first night we start ups a barbeque on Windward beach that will end for a couple of us at 4am swimming in the amazing Pigeon beach under a bright moon.

The last night out is anyway the best I could hope. After enjoying a good live music concert in Sherley Heights, together with Vientiane we get invited by the Captain on board Wylde Swan, an amazing tall ship from Holland. 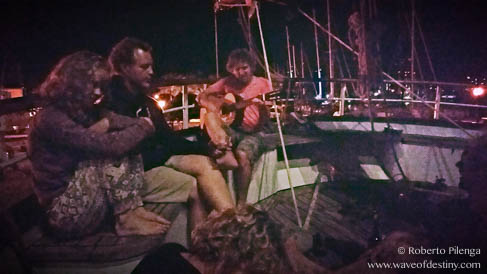 She has 14 crew on board including the 4 teachers to trainee 30 young teenagers who sleep on hammocks hanging from the room of a big room next to the galley. We climb on board through a rope hanging from the back end of the boom and we find the chief singing and playing the guitar while the crew still awake enjoy the night in port sharing with us some good wine.

Between glasses a completion starts and we hoist the staysail of the jib as fast as possible: with Jonathan we reach the best time of the night with 25 seconds… The record remains of Captain Fosse: 20 seconds on his own.

I sleep in the Bowsprit net for a couple of hours and I immediately get in love so that I offer myself to volunteer on board starting from Sint Marteen where we both are heading.

Crossing finger I’ll have an opportunity with the new captain. 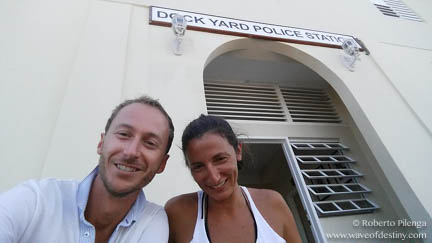 It’s sunset when we say goodbye to Roberta and on board Wind Whisper I sail out the bay with Luis for a night sail to Sint Barth.

We anchor her at Shell beach, just out go Gustavia port, and here I see the red hull Saturn anchoring next to us few hours later.. On top of the other courtesy flags I see an Italian flag that is the starting point of my long talks with Marco who is willing to tell his story and have some company.

The Story of Pi begins….or at least the one of Marco..

Saturn, 7.20 meter long and 40+ years old, is his second boat after the first one sank 60 miles off Gibraltar following a storm. After being denied shelter in a port in Portugal he found himself in the middle of a storm and despite a military boat tried to protect him from the breaking waves and throwing him ropes to tie him up, the damages to the hull were too big and he finally had to abandon the sinking boat. 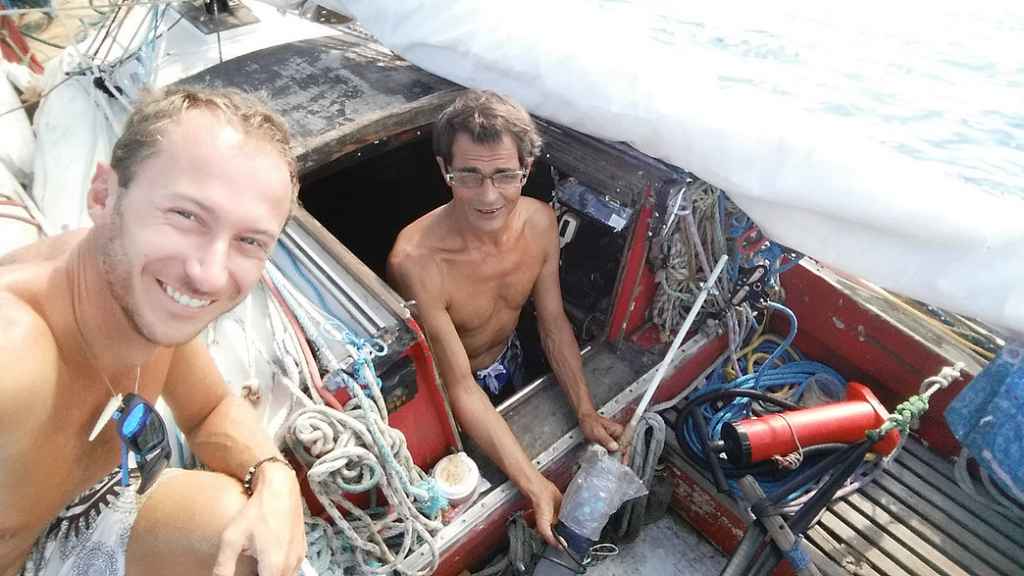 But here it started also his sailing with Saturn that he sailed South toward Cape Verde. It’s during this lag that the boom’s gooseneck suddenly broke onto his head and covering his face with blood and setting him in front of an hard decision: tackle and try to go back north fighting against current and winds to reach again Canarie islands and an hospitalù, head eastward toward Africa; or carry on as fast as possible to Cape Verde. The last choice wins and in few days he faces the new challenge to spot the almost flat island without any GPS on board. The patience wins and he waits a boat passing by to find the correct route to an achorage. 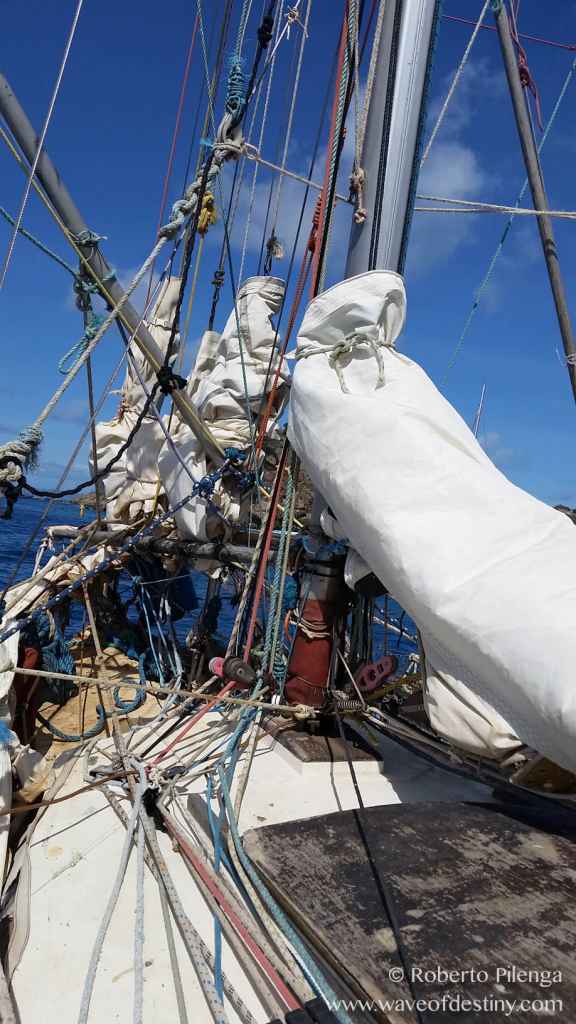 Despite being August, the Hurricane season, Marco can’t wait more and he decide to set sails and head across the Atlantic Ocean. It will take him 53 days to reach the coast of Brazil, but the most difficult of all these days he confuse to have been the last 4 days: he finished both food and water and reaching Brazil saved his life!

Three times the pirates visited Saturn and stole as much as they could from this poor and old boat. A fisherman even stole one of the three anchor set by Marco in a bay to protect Saturn from a storm in the area. The result being the boat dragging on the bottom of the bay with Saturn heading to the cliff…Desperation gave Marco the power to lift the other 2 anchors together and head to open seam to save the boat: I must admit I haven’t been able to lift neither one of the anchors on my own!

The tales and stories of Marco make the time fly and the aperitif with Marco with a couple of beers became ab important moment of my day.

I love listening Life stories and when we decide to change anchorage after three days Marco decide to follow us in the norther Anse a Colombier, despite the effort that lifting the anchor without a winch requires.. Apparently also Marco enjoys our company.

One of the last stories of Marco before lifting anchors is about Dolphins who apparently saved his life twice: while sailing they started suddenly jumping in front of the boat from left to right and bumping on the boat hull to signal Marco to change route heading to starboard as he did. This avoided him once to crash against a big semi submerged rock and the second to avoid a big thunderstorm who few hours later appeared to portside and moving toward him.

I could carry on for hours repeating the amazing stories of the Vagabond of the Oceans and his Saturn, but my travel carries on and in few hours we reach Saint Marteen while Marco awaits for lower waves.

This will be also my final destination with Wind Whisper and the magic Captain Luis!

Where to go next?

Destiny brings me to carry hoping to join the amazing Wylde Swan whose Captain I carry on meeting in the centre of Marigot, Sint Marteen.

After visiting also them on board another time on the other side of the bay and meeting the new Captain I unfortunately have to drop the last hopes: crew is well defined and the boat is full!

A couple of new ideas already comes to my mind: Carnival in Brasil on the 5th of February with Nori, a great friend since the time of my Erasmus in Spain and maybe a fast trip to explore Cuba.. but a new idea arise to my mind while spending time and talking with Jess. She’s a Venezuelan girl with an interesting life that brought her to the island a couple of years ago.

Apparently the island is the right place where to look for good opportunities to buy a boat and after few hours with her I know half of the people and who might give me some hint on how to find Her.. I don’t really expect anything, but let’s be open to the possibilities of the wave of destiny..