You are here: Home / Brazil / Living with the Amazon tribe

It takes a whole afternoon of research to find the jungle experience fitting my desires… Not touristic, adventurous and wild!

The taxi driver is the first to offer me a standard tour and as usual trying to put pressure with the typical excuses: there are the last places, others more expensive, the need of a  group to do a tour, a special discount…

The tour is typically as follow:  pick up at the hostel with a touristic van that drives you to a small boat that sails up the Rio Negro.. Here at the junction of the two rivers the water colour changes and the pink dolphins appears! The tour continues to a comfortable forest lodge where you spend two night alternated by a night on hammocks in the jungle, usually 30 minutes walk from the lodges of the other nights…

Simply not what I’m looking for!

Lots of Google searches and some questions to Willian, a new friend working at the desk of the Manaus Hostel, to find what appear to my eyes as the right adventure: www.aguiaamazonas.com.br

I call the number and after a short talk with Antonio I’m already on board his 3 days/2 nights tour! 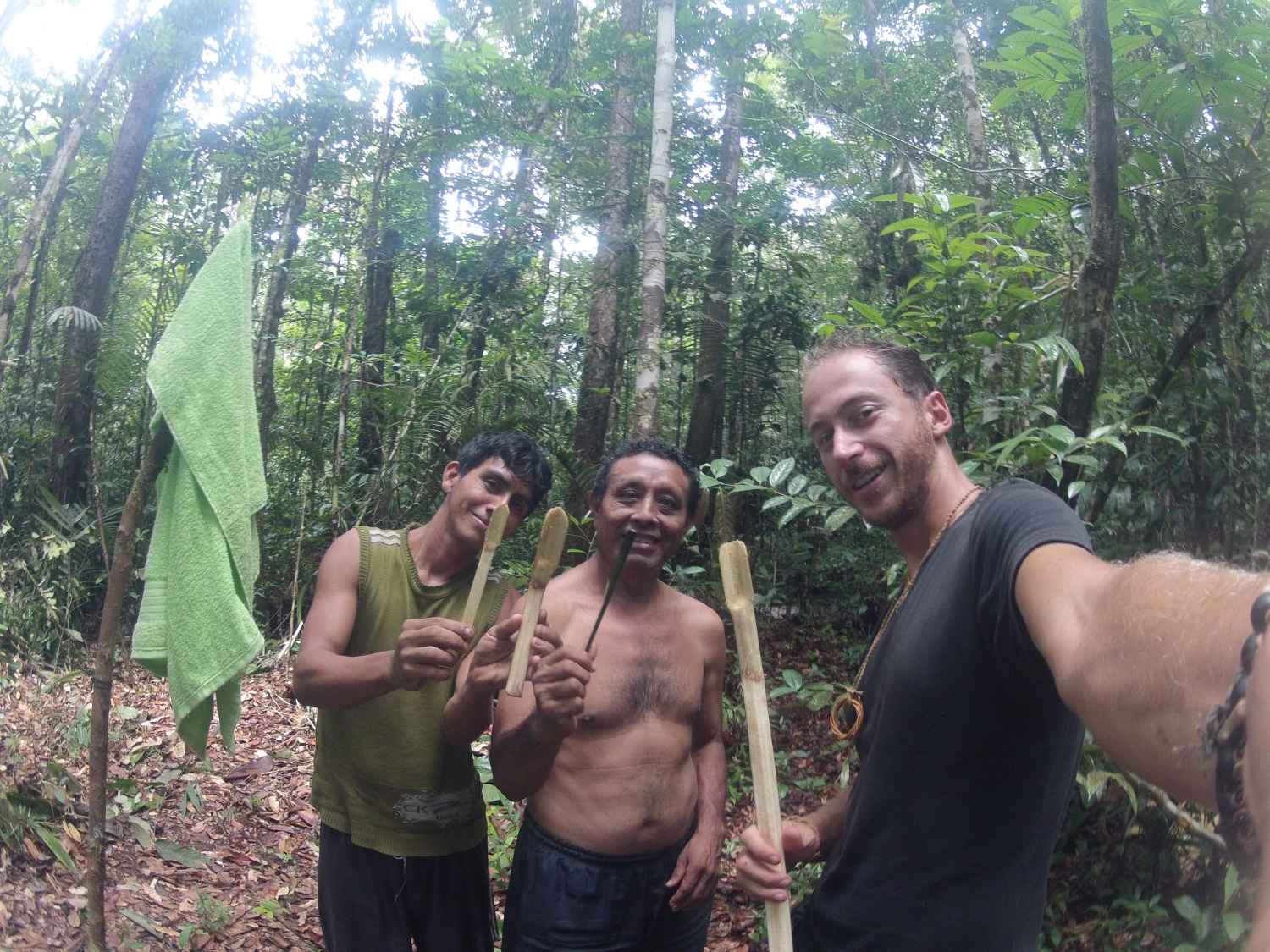 The only problem is “cash payment only”…  After the robbery of my mobile and VISA card and the malfunctioning of the other two credit cards, the cash withdrawal problem has now become critical with my last 10 Brazilian Real.

I wake up early and after being denied a cash back in three different banks and Western Union, I feel like a miracle when the ATM of Santander Bank start counting the money in the dispenser. I can’t believe when few seconds after it give an error in the counting aborting the operation..

Luckily the second try is successful and I finally get cash in my hands!

Time for some shopping before heading into the jungle..

6.30am sharp Antonio pick me up at the hostel and after 1 hour of a local bus we join Manuel, our boat driver and Antonio’s neighbour in the forest.

I feel like jumping back in time to my first travel backpacking in South East Asia with Mattia and Renato. At that time a speed carried us to Loang Prabang sailing on the Mekong river in Laos (www.youtube.com/watch?v=FRG2C6ac_q4).

Manuel drives us safely in the turns of the river, around fallen trees and low waters while birds and vultures flies on top of us.

At our arrival at the jungle lodge 1 hour and half later Nando, a candidate guide who will join us, is already waiting for us together with his wife Cleia and Niusa, Antonio’s wife.

we enjoy lunch before our adventure starts. Antonio explains me his good plans to develop further the lodge and the multi days adventures he is offering and after testing a “short” adventure with him I would definitely recommend to any friend looking for “a bit” of wilderness!

For the following 3 days will be just Antonio, Nando and myself with our backpacks and the food reserve we are carrying with us, unless we (or better to say they) will hunt any animal in the jungle.

As soon as we start walking Nando loads his rifle to have a ready bullet in case we spot an animal to have dinner or in the worst case an animal that might be dangerous for our safety: Antonio met a Jaguar only three times in 30 years, but better not to be un-armed when will happen again…

I secretly hope to be present at his forth meeting to see a jaguar!

We spend the rest of the afternoon walking in the jungle while Antonio and Nando flood me with names of medical plants, type of trees and wood, birds that we hear singing all around us the whole time: from the Tucano beating trees to the Captain du Foresta and other impossible names for my Portuguese level.

Antonio shows me animal paths and pulls out of his hole a poisoning Tarantula . “Don’t worry this one is not mortal! The poison just reach your brain and makes you blind and slow.. for the rest of your life!”

A Tarantula: what a pretty cool animal to play with! 🙂

Antonio teach me how to light up a fire using some shavings from Breira plant that easily burns and how to get the initial flame using two batteries connected by a special natural conductor he brought from Manaus: Not the stone and wood I was expecting, but more wild than a lighter.. and takes me anyway a bit of time to make it work”

Meantime Nando and his inseparable machete have already prepared a natural grill using “Ispeto”, a plant that doesn’t burn when we roast a chicken raised by Cleia’s family: what an amazing taste far from the supermarket chickens produced nowadays!

And finally I get in my hammock with mosquito net!

Another life dream to sleep in one of these in the middle of Amazon forest with local tribe!

We spend the next day going deeper in the forest, using the machete to re-open an old path in the wild jungle while they teach me further medical plants such as Amapa whose juice generate diarrhoea that can then be cured by Sova’s juice in a never ending circle.. 🙂

Cimboa is another interesting radix that once beaten and melted in water could kill a person in less than 5 minutes. Beware of your wife!

Nando is instead telling me about Char de Cravo the natural Viagra used by the tribes of the Amazon: apparently they have a natural solution to any problem!

The real surprise comes at dinner time when after building a new campsite and having a regenerating swim in the waterfalls Antonio is out hunting… What he comes back with leave me open mouth: a land turtle!

I can’t understand if they are trying to play me or if they seriously plan to eat a turtle for dinner, but after a detailed recipe I surrendered to the evidence..

A bit disgusted by the idea of eating an animal that in my culture is so rare to see, I kindly refuse the menu, hoping not to offend anyone. They are used to cultural differences and, after tying up the turtle for their dinner tomorrow, a good noodle soup and some rice with sardines is served!

A feeling of relief pervade my stomach, but the turtle hanging face up continue bothering me while lying on the hammock.

Talking with Nando I reach a deal and I buy out the turtle.

We name the turtle Roberto Miranda and let her free with the deal to be the guardian of the new campsite.. (or until they don’t catch her again..)

I will discover at dinner the following day in Manaus that Turtle is a pretty common dish in this area of Brazil and not only for the amazon tribes.

The tour ends with an abundant lunch at the lodge during which a “coelho” (jungle rabbit) cross the courtyard in front of our table: bad decision since Nando’s line of fire is very accurate and instead of the turtle they’ll have coelho for dinner!

Survived to the jungle!

Time to head back to civilisation and jump on a flight for the next amazing experience: The Carnival of Rio de Janeiro!

The video of the Adventure: