Since I started to explore this huge country named Brazil I also started hearing the suggestion to visit the “wonderful island of Morro de Sao Paulo” located just south of Salvador de Bahia.

But a neither a couple weeks ago I was in Sao Paulo and not without a coupIe of beers a friend revealed me a secret about a mysterious Island… Just a bit south of Morro there is this smaller island with long white and sandy beaches, but the best of all almost no tourism. Indeed while to reach Morro is enough to jump on a daily fast catamaran, the travel to reach this magic island is too long and complex for a weekend out of Salvador.

This allowed to keep the island off the mass tourism that reach her only during January while during the rest of the year you can almost get the full white sandy beach for yourself..

This island is named Boipeba. 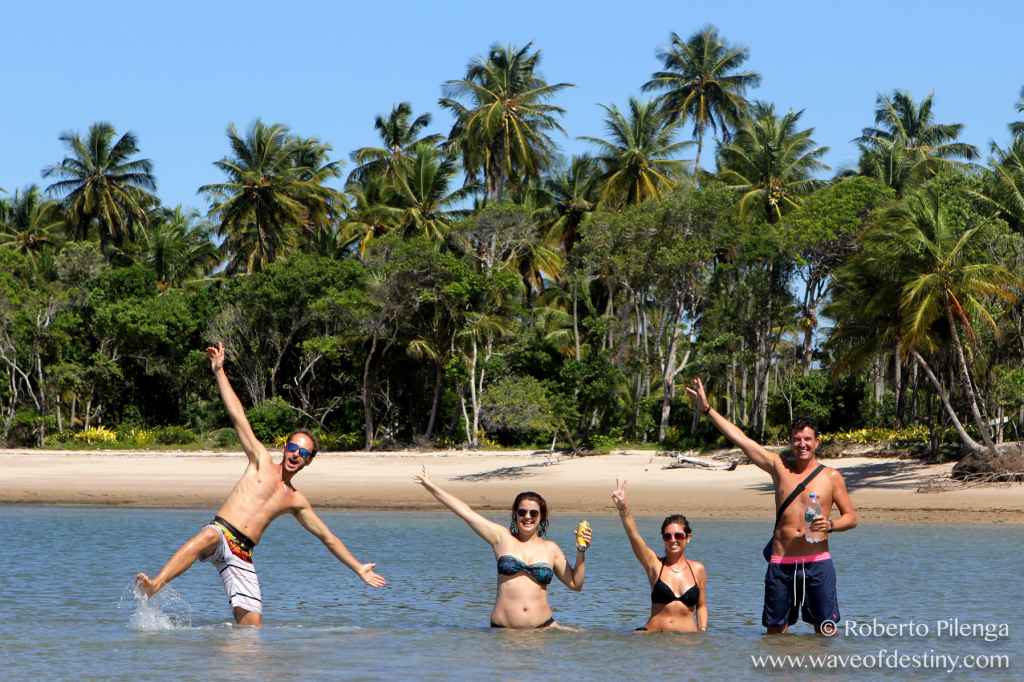 My trip to land on here is indeed not easy and after “just” 29 hours of bus from Rio de Janeiro, a night in a questionable hostel next to Valenca’s bus station I finally jump on a fast boat that for an hour does a zig zag in the low tide and shallow water of the canal separating the island from the mainland. 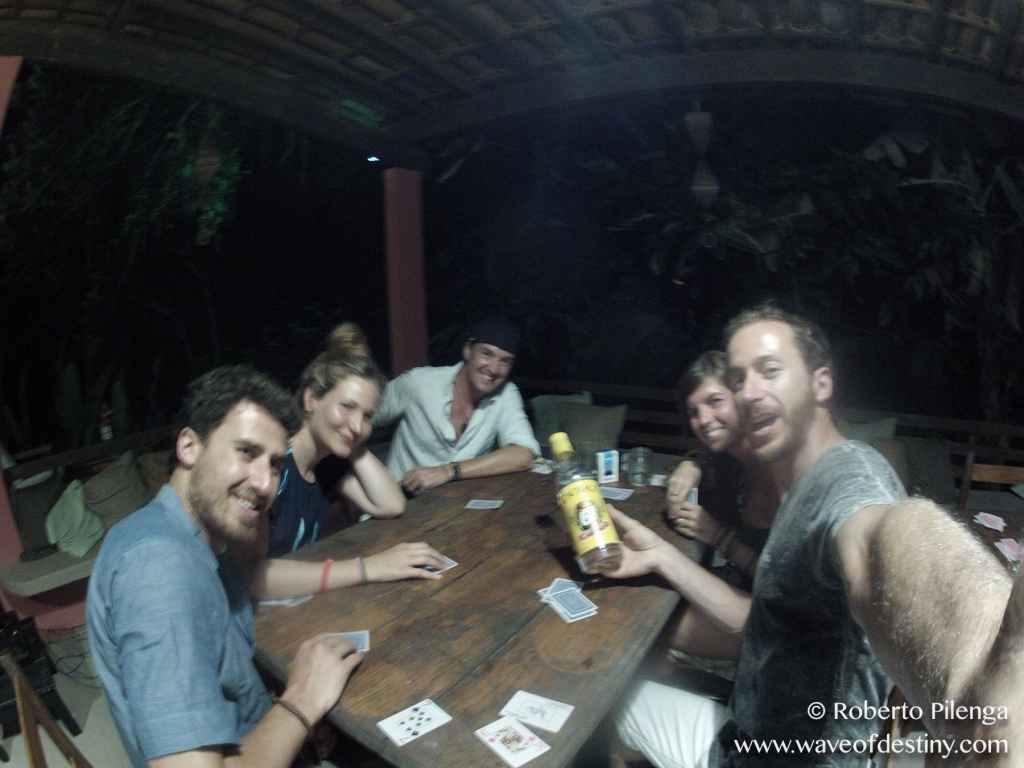 The suggestion of my friend Felipe turns out to be right from the first step on land. No pushing people offering hostels or restaurants and I immediately get a friend and the right place to stay: the quiet Abaquar hostel: www.abaquarhostel.com

A feeling of harmony and peace is all around this place where Marina is taking care of the the hostel while the owners are abroad. A garden with hammocks and two lovely dogs complete the picture with many interesting travellers (from Canada, Italy, Argentina, Brazil, France, …). Some glasses of good cachaca with Italian touch and we’re all friends sharing Italian and Brazilian food while playing the best drinking games I can teach 😉

The island is full of beautiful surprises and we start exploring it with a full day walking from the southern “town” of Boipeba and proceeding north along the eastern beaches. We reach the famous beach of Morere where we almost fall asleep in relaxing natural pools created on the beach by the low tide.

It’s time to try and learn to cook Makeka: this traditional food is typical of this area of Brazil. A first layer of onion is followed by tomatoes and shrimps (or other land meat if preferred).  Coconut oil and milk complete the chemistry: Simply delicious!

Despite the limited tourism various boat offers us a boat tour around the island and with the new friends from the hostel we are happy to join one . We spend the day between natural pools where bars are on floating boats and we sit around floating table semi submerged in crystallin clean water ad surrounded by tiny fishes.

Following the suggestion of our Captain, who apparently has 15 brothers and sisters, we try the “Lambretta”. This name taken from a Italian car from the seventies, is instead used in this part of Brazil to indicate a shellfish soup cooked in boiled water and known for its aphrodisiac qualities!

The same aphrodisiac qualities were alleged yesterday night by a guy in the street who sold us a local variety of peanuts..

The day on the water can’t end before an aperitif watching the sunset from an Oyster bar in the middle of the river: around us only water and the pristine forest of the natural reserve covering half of the island… Another ordinary day in Paradise!

The days pass fast and I am tempted to stay longer in this wonderful paradise, but today it’s “Terceira Feira” (Tuesday) and in Salvador it’s the special day of the week. Every Tuesday indeed the streets of Pelurinho, the historical centre of Salvador, fills up with live music concerts and bands performing everywhere. 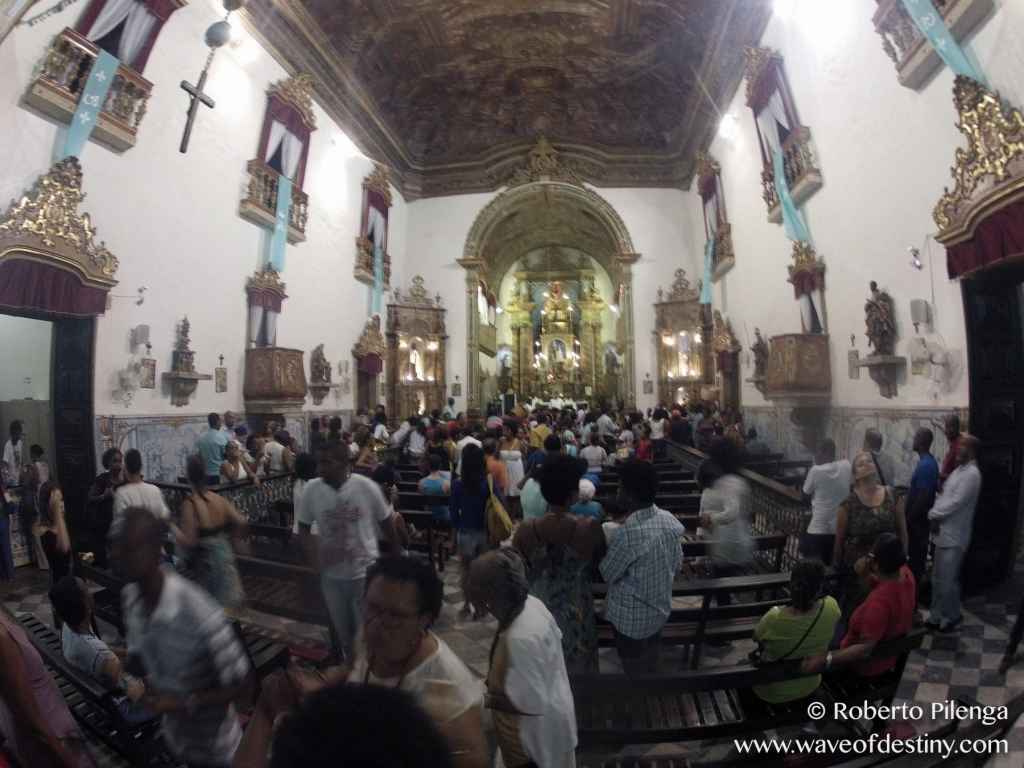 A dozen of drummers start playing below my hostel’s window for over an hour and the rhythm is so addictive that I can’t check in in my room until they end more than an hour later. But it’s just the beginning of a party that continue for the whole night.

Even the church is full of music and energy! Here in Bahia indeed the African influence on religion and culture has been far more significant that anywhere else. The holy communion is the climax of the mass with dancing man and woman bringing buckets of freshly baked bread to the altar in a dancing procession accompanied by the joyful songs. The bread is then distributed within all the present in a friendly banquet.

I explore a bit around the city pushing myself south to the neighbourhood of Barra coast with its long beach and beautiful lighthouse. Fifteen minutes by bus and I join a friend in the beautiful and cozy area of Rio Vermelho with its elegant restaurants and bars.

Differently from places like Boipeba and Parati, I don’t get here the feeling and temptation to stay some days more and not move forward to the next destination waiting for me: the natural wonders and wilderness of Chapada Diamantina.