You are here: Home / Brazil / The festival of Boi Bumba on the Brazilian Amazon island of Parintins.

The remote island of Parintins is the stage of the incredible Boi Bumba festival:

An explosion of colours, passion and pure joy that every June attracts thousands of people from all around Brazil and few nearby countries, but keeping genuine and not touristic as many realities nowadays. 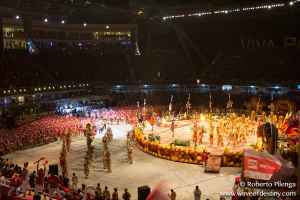 The island is kind of divided into two parts and “tribes” that compete during three days for the pride of their tribe.

The objective is to tell a legendary story in best possible way. To reach it hundreds of people worked for over 9 months planning, designing and building the impressive parade trucks tall even 30 meters, costumes and trying over and over the complete show that is now in front of us! 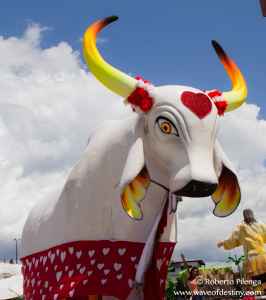 All around and on top of the the trucks tireless artists dance for almost 3 hours dressed in colourful costumes at the rhythm of the music played by the energetic band performing with drums and all kind of instruments.

Each team has an official colour: blue is the one of “Caprichoso” team, while red is the “Garantido”’s one. The importance of it is so strong that everyone entering the stadium in the area of one team is fully checked to be sure that is not carrying any item with the opposite team’s colour. Just to give you an idea… have you ever seen a blue Coca Cola? Here you can…

The last trump card for each “tribe” is the “galera”!

The “galera” are supporters, fans, alias all the common people like us that fills the stadium and dance at unison for the whole duration of the performance, following the guidance and choreography defined by dancers who magically succeed to unify us all in coordinated movements and energy! 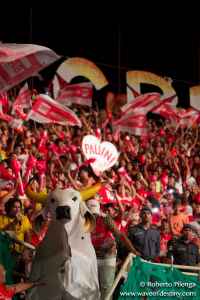 The mix is really explosive!

Still a bit confused, destiny and luck come in help bringing me a truly friendly and beautiful group of Brazilians coming from all around the country. Everyone is so nice and even more with me since I am the only foreigner of the group! I soon discover that I am almost the only “Not Brazilian” also of the whole festival..

Immediately I face a fundamental question and decision to take when they ask me: “Garantido or Caprichoso?” 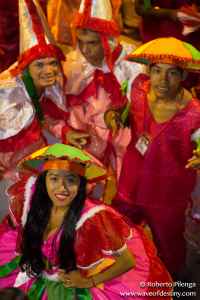 How to choose between them?

“Caprichoso” immediately gets my sympathy both for the name (meaning “capricious”) and for the blue colour (my favourite one).

But to be fair and follow the insistence of Jovita (crazy supported in the heart of Garantido team) I decide to give a possibility to both the teams: the first night I am then with Jovita’s team and the crazy energetic red bull of Garantido spending instead the second night in the opposite side of the Bùmbodromo (stadium) among the other supporters of the blue bull Caprichoso.

The show are really both amazing and impressive for the dimension, complexity and details of the parade trucks, the dancers costumes and show. But at the end of the second night I am truly conquered by the rhythm and energy of the Garantido team and band together with their tireless passionate “galera” coordinated by three guys dancing and moving for the whole time in front of the tribune with thousands of people. The red signs painted on my face and on the one of the people around me are a clear sign of this overwhelming passion.

Dancing, singing, hugging and meeting people and the 3 days of show runs fast and in the end we, the Garantido, even win the competition!

At least for this year… 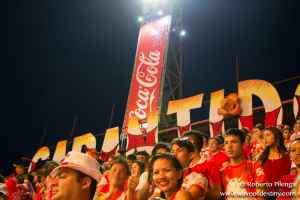 If you want to read more about the myths, tales and legends behind this amazing festival

I suggest you to check out this link: www.boibumba.com

How to reach the Boi Bumba festival and the island of Parintins:

A small airport connects the islands with Manaus, but most of the people reach it sailing in the Amazon highway: the immense Amazon River. 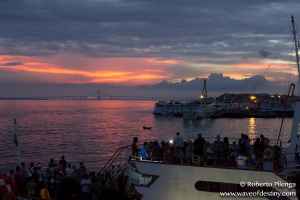 Coming from Manaus, the nearest town with an international airport, you have options on the water: a fast boat taking around 10 hours from Manaus to Parintins, or the more fashionable “hammock-boat” that takes around 18 hours. Even if slower it’s a real experience with the typical transport of the rivers of the Amazon: big river boats with 4 decks usually equipped with a music bar on the top deck while the other levels are filled with hooks where passengers hang their own hammocks. The hammocks are so numerous that cross each others and food is served on board in shifts at the canteen.

An option is also to choose as departing harbour the city of Belem and sail upstream for four days with the “hammock” boats.

I strongly suggest the hammock boats option obviously, might be the one day from Manaus or even better enjoy the four days of relaxation sailing from Belem.

Suggestions for the “hammock boat” and to get a proper spot on board: 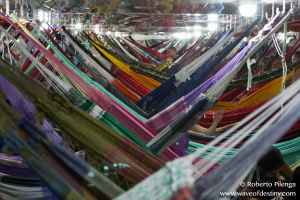 Might seem a detail to many, but it’s not!

I found many of the following suggestions fundamental for a safer and a bit more comfortable multi-day trip, but very useful also for a day trip like mine that gets very busy on board (I will visit the boat 3 hours in advance of departure just to get a spot for my hammock).

Where to place your hammock?