You are here: Home / Argentina / From Argentina to Brazil through Uruguay!

What to do next? Where to go? 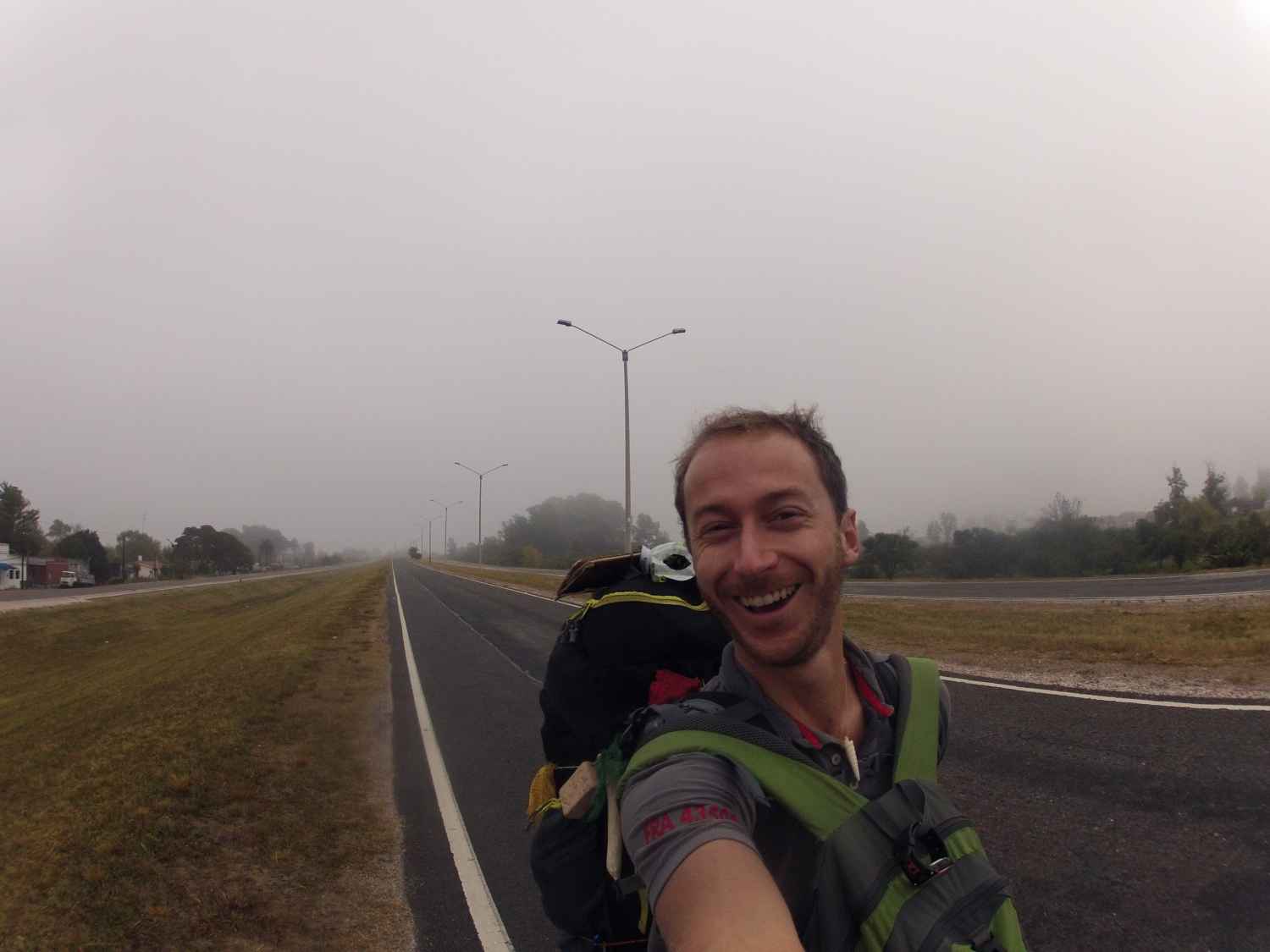 The last month around the World:

I’m in Colon, Entre Rios region, just next to Uruguay Border. I ended up in this small town to visit Paula, a friend met through Couchsurfing back when I was living in Amsterdam.

(For those who might not know Couchsurfing it is a website where travellers meet and organise events and often receive local hospitality on a spare sofa or bed for free).

Thanks to Facebook we kept in touch and after a day travelling across Argentina I immediately feel home thanks to the hospitality of Paula and her mum. What an amazing four days of quiet familiar life and even great partying with new friends even till 6am.

But the doubt remains and as usual the decision is taken at the last minute, the same morning of my departure when I wake up. I check email and in 2 days I have to be in Porto Alegre, Brasil, 1 country and 2000 Kms away from my current position on google maps 🙂

After a bridge on the Uruguay River I’m a bit sad to enter Uruguay and leave a Argentina, a country that gave me a lot of friendship and welcomed me amazingly during the last 2 months.

Strong of the good experiences in the valleys around Cordoba to get a lift from local people obtaining with it a good talk and taste of local culture, I decide to try it again in Uruguay! With a short lift by a car trailer and a long 4 Kms walk with 20+ Kgs of backpack, I finally reach the highway to Tacurembò where I learn the first lesson about Uruguayan culture: the culture is pretty conservative and hitchhiking is just not part of its habits.

The second rule I learn of this country is that exceptions always exists and in Melo I receive a great example of cultural opening and of Uruguayan hospitality by Florentina, a new friend thanks to Couchsurfing. She welcome me with tasty “fideos” (short pasta) that I have discovered since time that can be cooked properly also out of Italy 🙂 I also get a ride directly into Brazil when she drop me the following day at the border of Rio Branco, a tiny border city with Brasil: Luck again on my side! 😉

Another walk with the 20+ Kms across the city for the custom formalities and another bus of 6 hours and I finally enjoy a dinner with Nora in Puerto Alegre!

Time to try a Brasilian Churrascaria where, while artists perform a traditional dance,  countless waitress fill our plates with meat without any pause: in the face of my vegetarian aspirations!

The city is… well.. a city! As usual there is a square to visit, the central market, a military museum: not exactly what we are looking for so after renting a car we head randomly to the mountains and the national reserves aiming to trek surrounded by nature and breathtaking landscapes!

Unfortunately this remains a dream and what we find is a lot of fog and a big impressive thunderstorm that also force us to stop the car!

We feel like back home in Pianura Padana in a bad winter day!

We pass through the touristic Canela and Gramada to finally decide to steer toward the coast in search of the sun!

A night in Torres to finally reach, only other 300 Kms later, the vibrant nightlife and beautiful beaches of Florianopolis! The night in the hostel brings as usual a lot of new friends with who we enjoy a couple of night partying before heading back to Porto Alegre 1000 Kms just for the sake of giving back the rented car after few hours of sleeping in the parking lot of the airport !

Travelling by land has become addictive and instead of searching flights to connect me to the latest destination I started searching for interesting places where to stop in my way north. In my way to Sao Paolo, it’s the city of Curitiba and the train toward the coast that get my attention.

Couchsurfing gets me in contact with Jacques and Gloria, a lovely older couple with the sun and desire to share in their heart. When my bus arrives 2 hours later a warm dinner and a glass of wine are waiting for me together with a lot of suggestion and great friendship! I have a private tour of the city by Jacques, exploring a museum and the government district of the city before heading the following day to the coast. The seaside village of Antonina doesn’t see a lot of tourist since time while in Morettes I’ll have to defend myself from the tourist trapper offering me the typical dish of the town: the Barreado a stew made of beef, bacon, tomatoes, onion, cumin and other spices.

Fog is again covering the mountains and I have to renounce to the train that costing four times the bus is simply not giving any view on the landscape today. But the guide still says it’s the most scenic train of whole South America.. The train will be for another time, maybe the Trans-Siberian Express later this year?

Another night bus and I reach Sao Paulo, apparently ranking no. 11 in the Crime Index 2016… I decide anyway to avoid the taxi and after being assured on safety by tourist information desk I’m on the metro toward the Avenida Paulista and the near by hostel! Arrived all safe being day, but I will opt for a Uber taxi in few days for the next night bus.

A further present of Destiny and in this week end falls the Virada cultural, a 48 hours of concerts and party on the streets of the city. It looks almost like Carnival with stands all around the city and planned exhibitions of the most famous singers of Brazil! As usual I don’t turn down and the party is on!

We will discover that statistics are not wrong and from a dance to another the mobile of Felipe disappear from his pocket and with it our possibilities to meet up with the group of friends: apparently to meet with friends in a big city a mobile is really needed and the old phone booth or appointment at the corner are not as efficient as whatsapp positions! 🙂

Sao Paulo impress me not only for the parties, but its centre is full of historical magnificent buildings including a theatre build mostly with material and products brought across the ocean from Europe. The neighbourhood of Villa Maddalena with artistic graffiti colouring the walls and the artistic shops and bars, the Paulista avenue rich of business buildings that close up during Sundays to give back the city to pedestrians, runners, cyclists, skaters. The only cultural events of May fills a book with musicals, cinemas, theatres, expositions: I have the feeling that I could stay here weeks keeping exploring and meeting new people and places.

But despite the temptation and the good atmosphere the travel is calling and Rio de Janeiro state is waiting, starting with the small coastal town of Paraty, whose existence I ignored till few days ago when in the same day three different travellers strongly suggested me to visit her on the way to Illha Grande!

Let’s check it out, will let you know if they were right…